The Wisconsin State Department of Public Instruction (DPI) proclaims “American students need to study global cultures, global challenges, and global connections, at all grade levels and across all subjects. “  It is their belief that “schools must strive to develop global literacy” in the areas of Communication, Citizenship, Careers, Culture and Community.  The Cross-cultural Classroom Connections program is adaptable to a variety of Wisconsin State academic standards at all grade levels.  Teachers from all academic areas have the opportunity to form cyber pen-pal connections between their classrooms and UW students from a variety of liberal arts backgrounds during the UW student’s time studying abroad through International Academic Programs. Read more about the standards here.

“The best learning experience that my classes had was probably recognizing cultural nuances such as greetings, meals, and societal norms between the US and the two foreign cultures as well as between the two Francophone cultures.” –7th grade French teacher that corresponded with two students studying in France and Senegal simultaneously

“My class was able to learn about a different culture that they may not have had the opportunity to learn about otherwise.  Students were able to challenge their “stereotypes” of the host culture through comparing likenesses and differences between their US culture and the UW student’s rendering of the host culture.” –Middle school multi-age Social Studies teacher that corresponded with a student studying in Senegal

“I learned a lot about France and Senegal and what they do there. It was cool to know what it is like.” 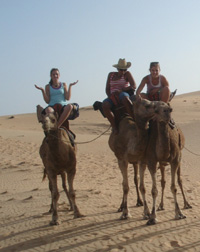 “I really liked how we got to talk to someone who is somewhere across the world.”

“[I learned] that in Senegal they eat in a large bowl and the mother will kind of throw the meat to everyone in the bowl.” 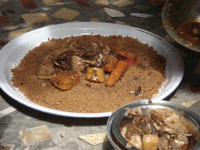 “I wish I could [study abroad] right now.”

Performance standards by the end of grade 4 as they relate to cross-cultural education:

A.4.5 Use atlases, databases, grid systems, charts, graphs, and maps to gather information about the local community, Wisconsin, the United States, and the world
A.4.7 Identify connections between the local community and other places in Wisconsin, the United States, and the world
B.4.9 Describe examples of cooperation and interdependence among individuals, groups, and nations
D.4.3 Identify local goods and services that are part of the global economy and explain their use in Wisconsin
D.4.7 Describe how personal economic decisions, such as deciding what to buy, what to recycle, or how much to contribute to people in need, can affect the lives of people in Wisconsin, the United States, and the world
E.4.4 Describe the ways in which ethnic cultures influence the daily lives of people
E.4.5 Identify and describe institutions such as school, church, police, and family and describe their contributions to the well being of the community, state, nation, and global society
E.4.11 Give examples and explain how language, stories, folk tales, music, and other artistic creations are expressions of culture and how they convey knowledge of other peoples and cultures
E.4.12 Give examples of important contributions made by Wisconsin citizens, United States citizens, and world citizens
E.4.13 Investigate and explain similarities and differences in ways that cultures meet human needs
E.4.14 Describe how differences in cultures may lead to understanding or misunderstanding among people
E.4.15 Describe instances of cooperation and interdependence among individuals, groups, and nations, such as helping others in famines and disasters

Performance standards by the end of grade 8 as they relate to cross-cultural education:

A.8.7 Describe the movement of people, ideas, diseases, and products throughout the world
A.8.8 Describe and analyze the ways in which people in different regions of the world interact with their physical environments through vocational and recreational activities
A.8.11 Give examples of the causes and consequences of current global issues, such as the expansion of global markets, the urbanization of the developing world, the consumption of natural resources, and the extinction of species, and suggest possible responses by various individuals, groups, and nations
B.8.2 Employ cause-and-effect arguments to demonstrate how significant events have influenced the past and the present in United States and world history
B.8.3 Describe the relationships between and among significant events, such as the causes and consequences of wars in United States and world history
B.8.10 Analyze examples of conflict, cooperation, and interdependence among groups, societies, or nations
C.8.9 Describe the role of international organizations such as military alliances and trade associations
D.8.3 Describe Wisconsin’s role in national and global economies and give examples of local economic activity in national and global markets
D.8.11 Describe how personal decisions can have a global impact on issues such as trade agreements, recycling, and conserving the environment
E.8.9 Give examples of the cultural contributions of racial and ethnic groups in Wisconsin, the United States, and the world
E.8.10 Explain how language, art, music, beliefs, and other components of culture can further global understanding or cause misunderstanding
E.8.13 Select examples of artistic expressions from several different cultures for the purpose of comparing and contrasting the beliefs expressed
E.8.14 Describe cooperation and interdependence among individuals, groups, and nations, such as helping others in times of crisis

Examples of Social Studies academic standards set by the MMSD based on the Model Academic Standards of the State of Wisconsin that may be met through lesson plans incorporating the Cross-cultural Classroom Connections program:

9. Exhibit an awareness that children grow up in different parts of the world with similar and different experiences.
10. Identify customs, traditions, and celebrations that have special meanings for their family.
11. Retell and repeat stories, rhymes, or music from different cultures.

7. Compare and contrast the culture of our local community to a different world culture.
8. Apply and practice skills of conflict resolution (persuasion, compromise, debate, and negotiation).
9. Recognize the commonalities of global cultures.

2. Use reference and information research skills to gather and organize information.
3. Explain how other regions of the world influenced the history of the United States.

2. Describe the role of world trade in U.S. economic development.

1. Compare personal cultural history with other diverse cultures.
2. Participate in various groups and assume different roles in the classroom and at school.
3. Identify the role and status of individuals and groups in the United States, past and present, in family life, religion, and other cultural activities.
4. Give examples of the importance of multiple viewpoints for understanding people, events, and issues.
5. Give examples of valuable contributions to the United States made by many cultural, ethnic, and racial groups.

6. Describe the technological advances that have led to increasing interaction among regions and nations.
8. Understand how people of different historical periods, places, and backgrounds understand their world.

2. Explain how increased specialization and trade have made countries more wealthy and more interdependent.
3. Identify the role of international trade and the rise of money systems in world history.

2. Describe the influences that affect the political structure of a culture in the world from the past to the present.
3. Identify major forms of government found in countries of the world and compare and contrast responsibilities and rights within each.

1. Identify cultural characteristics of regions (language, nationality, religion, art, music, etc.) and explain the effects of cultural contact among the societies of the world.
2. Identify common problems, needs and behaviors of people from similar and different environments and cultures.
5. Compare and contrast the rights and responsibilities of citizens in diverse societies.
7. Identify and describe ways regional, ethnic, and national cultures influence individual’s daily lives.

The MMSD academic standards in the area of World Languages follow the key objective of the Wisconsin DPI’s Model of Academic Standards.  These standards focus on five main areas of knowledge and have many possible correlations to the Cross-cultural Classroom Connections program:

Use the spoken and written language from a variety of sources including native speakers and authentic materials.

Use the culture where the language developed and is spoken, including similarities and differences among own culture and that of the language studied.